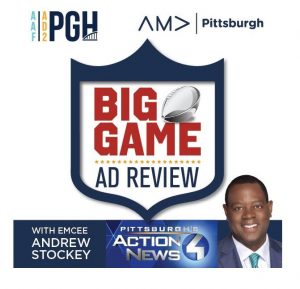 Join us for our annual Big Game Ad Review
as we partner with the
American Marketing Association Pittsburgh to review,
discuss and cast votes for television commercials
that aired during the Big Game.

Andrew Stockey of WTAE Channel 4 Action Sports
will lead a panel of advertising experts through a discussion
of their favorite 16 commercials, with the opportunity
to cast your vote for each one!

Our Panel of Experts:

Stockey has won Edward R. Murrow and Golden Quill awards for his sports reporting. He has also received Best Sports Play-By-Play from the Pennsylvania Associated Press, in addition to being honored multiple times by the organization for best sportscasting.