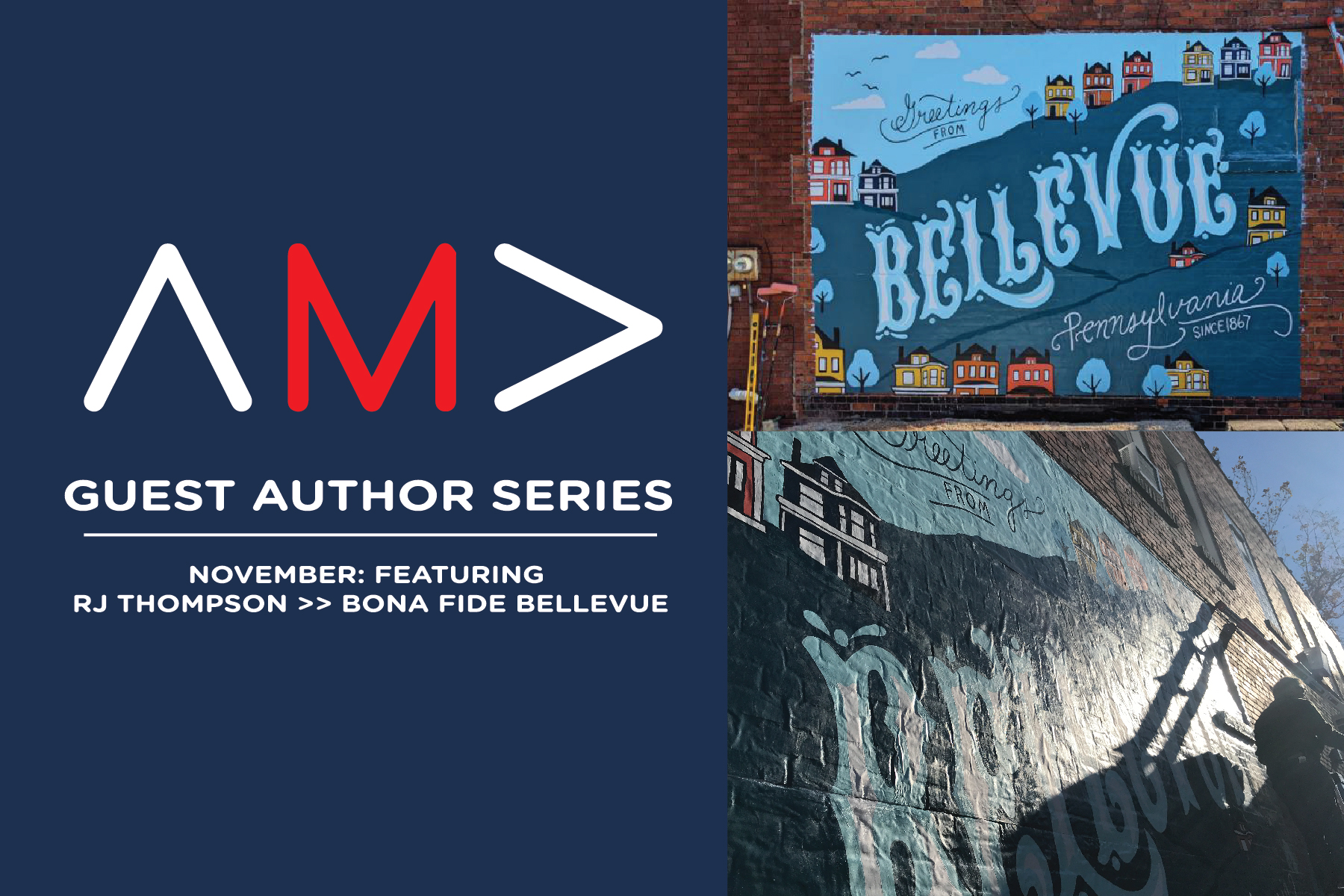 It was just slightly over 2 years ago that Bellevue resident, business owner, and friend Scott Streit reached out to me regarding a new building he purchased. Scott purchased a storefront property on Bellevue’s main business corridor, Lincoln Avenue. His vision was to transform his building into a property that signaled local ownership and investment as well as revitalization in the community. He didn’t quite know how that transformation would occur, so he reached out to me for some ideas. My recommendation was to produce a mural on the side of his building that was designed, painted, and installed by and for the community.

As a board member of Bona Fide Bellevue, a community development corporation that focuses on Bellevue’s revitalization and my background in public arts marketing and funding, Scott was immediately on board with the mural. I contacted my friend Jennie Denton of Lamplight Creative to put some ideas together for Scott’s space and she turned around two amazing designs. Soon after, I set up an IOBY fundraiser to raise the $2,000 we needed to produce the mural. We formalized it by calling it the “Bellevue Mural Arts Program.”

Marketing the fundraiser may have been an arduous challenge had it not been for some research work my business partner in +Public, Kent Kerr, and I completed for his master’s thesis. As graphic designers, we knew that to produce the best outcomes, you had to design for your audience. One of the best ways to learn about your audience, especially in the civic/community context, is to recruit residents and business owners into design charettes that produce the data we need to make strategic decisions. Though out work, we realized that Bellevue had a large appetite for public art and that the market could bear $25-$150 donations per person. The ability to fundraise effectively and efficiently came into focus.

We set up our fundraiser through IOBY, a civic-focused fundraising platform. We advertised the fundraiser primarily via three-specific channels: Facebook, E-Mail, and Word of Mouth. Each member of the team wrote posts emphasizing the different aspects and benefits of the project on their personal profiles and in community groups. The enthusiastic reactions we each received was inspiring.

Through the IOBY platform, we were able to raise the $2,000 we needed within 2 and a half weeks. Having met our goal before the deadline, we collectively felt optimistic and justified that our research was accurate. We were going to make a mural! However, further serendipity hit our project and through IOBY we were the recipient of a matching arts grant which ultimately brought our fundraising to $4,919.

With our fundraiser being completed in December 2019 and being a huge success for all stakeholders, we could then focus on the production of the mural for a spring launch. However, the COVID-19 pandemic hit and effectively put our project on hold for another year and a half. All the capital, awareness, and expectations that we built through our marketing efforts were at risk of being lost due to long-term inactivity. Fortunately, throughout the duration of the pandemic there were few complaints and most people understood that if we were going to do this right, we had to it right the first time – and safely. Still, we wanted to keep public enthusiasm as high as we could.

During the pandemic, we had sporadic events and updates that supported our marketing. Our focus was on community building through affinity. Through Bona Fide Bellevue, we created a Community Arts Committee, a Public Arts Inventory, and offered a few webinars for volunteers and other stakeholders to learn about the history and future of the project. The Community Arts Committee was intended to spur and sustain conversations about how public art could manifest in Bellevue and empowering artists to put ideas forward to the artistic community with hopes of collaboration. The Public Arts Inventory, while even to this day is still in its infancy, is a record of all the physical places that public art could be placed. Garage walls, cement steps, sidewalks, building walls, open green spaces, and more. The Webinars covered both the committee and inventory, but also the genesis of the project and where it will go once, we were able to safely paint. We recorded all our efforts and made each of the assets publicly available. Once you start down this path, you can’t turn around – and when motivation is high, you need to sustain it and nudge it forward to create proof. When it comes to the promise of public art, I firmly believe that most people do not believe anything will happen until they see tangible proof. Ultimately, these efforts did sustain our marketing.

When it came time to start painting, we had to consider the cache of engagement we built up throughout the pandemic. We started a Bellevue Mural Arts Program Facebook group so we could collect volunteers and stakeholders in one place. We secured space to paint in the art studios (also known as “The Cove”) at Greenstone Church. We held a community painting day that had about 40 people, ages 3-65, show up to paint. We asked volunteers to signal-boost their experience by offering a testimonial post on their Facebook profiles, which sought to recruit more people into painting. It was critical that our mural maintain its concept of being painted by and for the community.

On November 6, the mural was installed. Facebook, Instagram, and LinkedIn posts saw hundreds of likes across several people’s posts. People who followed me or Scott or Jennie on these social platforms, but were not from Bellevue, were actively engaged and invested in the story of the mural. Now that we’ve installed the mural, people are asking, and rightfully so “what’s next?”

The Bellevue Mural Arts Program marketing started as a small grassroots social media campaign that evolved into community building that evolved into storytelling that converted followers from Bellevue and other locations into stakeholders. The narrative formula we utilized throughout this process was based on three core ideals: be visual, be personal, and be positive. Whenever we made a post, attach an image of the mural artwork or as it existed in-progress. Tether your personal feelings to that artwork, giving it soul and purpose beyond creative expression. Be positive, as the pandemic has made quick work in cutting down positivity across the board.

So – what’s next? Get people to the mural to take photos in front of it and post to social media. The social proof that can be created from this will hopefully bring people into the Bellevue community to visit, enjoy our amenities, and make a few friends…and probably starting a new mural.